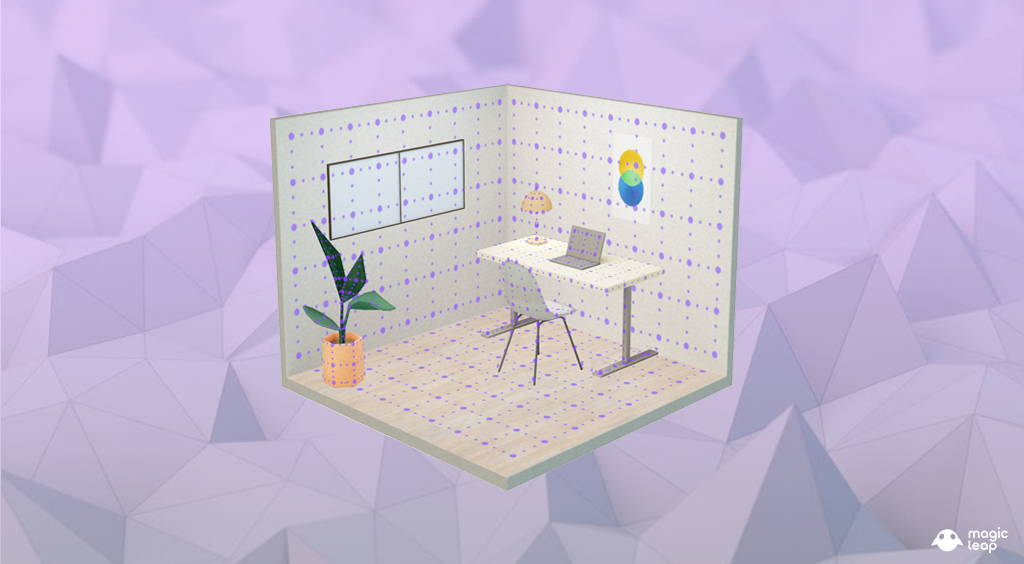 Create provides a series of virtual physics-based objects, which require a spatial map (virtual reconstruction of the physical space) in order to behave as expected when interacting with the real world. For example, a virtual ball should bounce off any physical surface onto which the user throws it to.

A few months before we released the project, we learned that there would not be a system-level set-up process in place to account for Create’s spatial mapping requirements prior to users launching the application omg device. This meant that there was no way to ensure the user would have an appropriate spatial map to run the experience, we also realized that we could not afford to run live-mapping in parallel with our physics-based experience due to mobile computing limitations; both of these situations posed a huge risk for our experience so we quickly decided to begin building our very own in-app set-up process.

We started by identifying the main problem:

How will users be able to reliably map any of their rooms without feeling lost or confused?

Spatial mapping was a new concept for the majority of users, so we needed to present this process as simply and efficiently as possible to prevent frustration and to avoid provoking the feeling of “doing work” on behalf of the device.

We set our goal to develop a guided process that would allow the system to quickly gather and reconstruct room data in the user’s space, the minimum requirements consisted of a floor surface as well as surrounding furniture and walls for collision and pathing. We knew that having this step as a requirement prior to the actual experience was a compromise we needed to make, we could not afford to present people with a virtual physics playground and have content going through surfaces. We challenged ourselves to make this step as efficient as we could, our target was to be able to fulfill the requirements  in under two minutes.

The process begins by surrounding the user within an invisible cube. Constrained to the user’s FOV (field of view), a reticle or “guide” is displayed, which is used as a visual compass to direct their gaze around each of the cube’s faces. 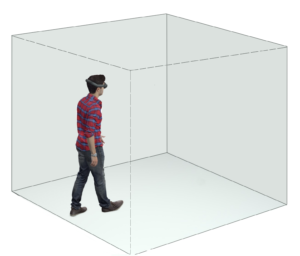 Each of the cube’s faces displays a series of visual targets or “waypoints” which require the user to overlap the reticle and waypoint for a few seconds as the system gathers room mapping data. 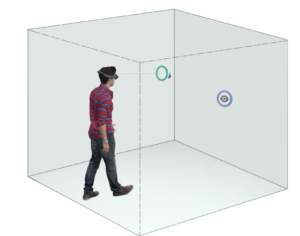 To provide visual clarity, a throbber progress bar is displayed within the negative space that is formed by overlapping of the reticle and waypoint. 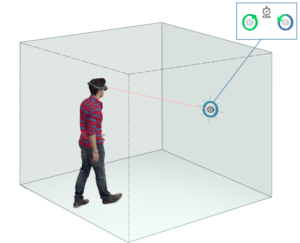 When the waypoint processing is completed, visual and audio effects are triggered to inform users wether or not the surfaces adjacent to the waypoint were mapped successfully. Additionally, a shader is overlaid to show which and how much of a surface was mapped. 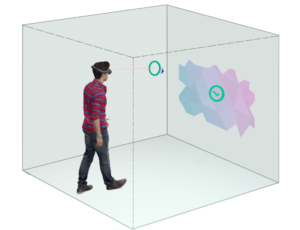 As mapping data is successfully collected, the box dynamically scales to match the correct distance of the physical surface relative to the user’s headset.

The process continues until the minimum requirements have been fulfilled.

The image bellow is the final wire-frame for this process, testing informed us that recurrent users found the process tedious after having to go through it every time they would open the app. So we added a branch to the user flow, which would allow more experienced users to map their space at their own leisure and determine the quality of the map by themselves.

As a fallback, we designed the system so that users could switch back and forth between either “guided” or “unguided” flows at any time during the process. 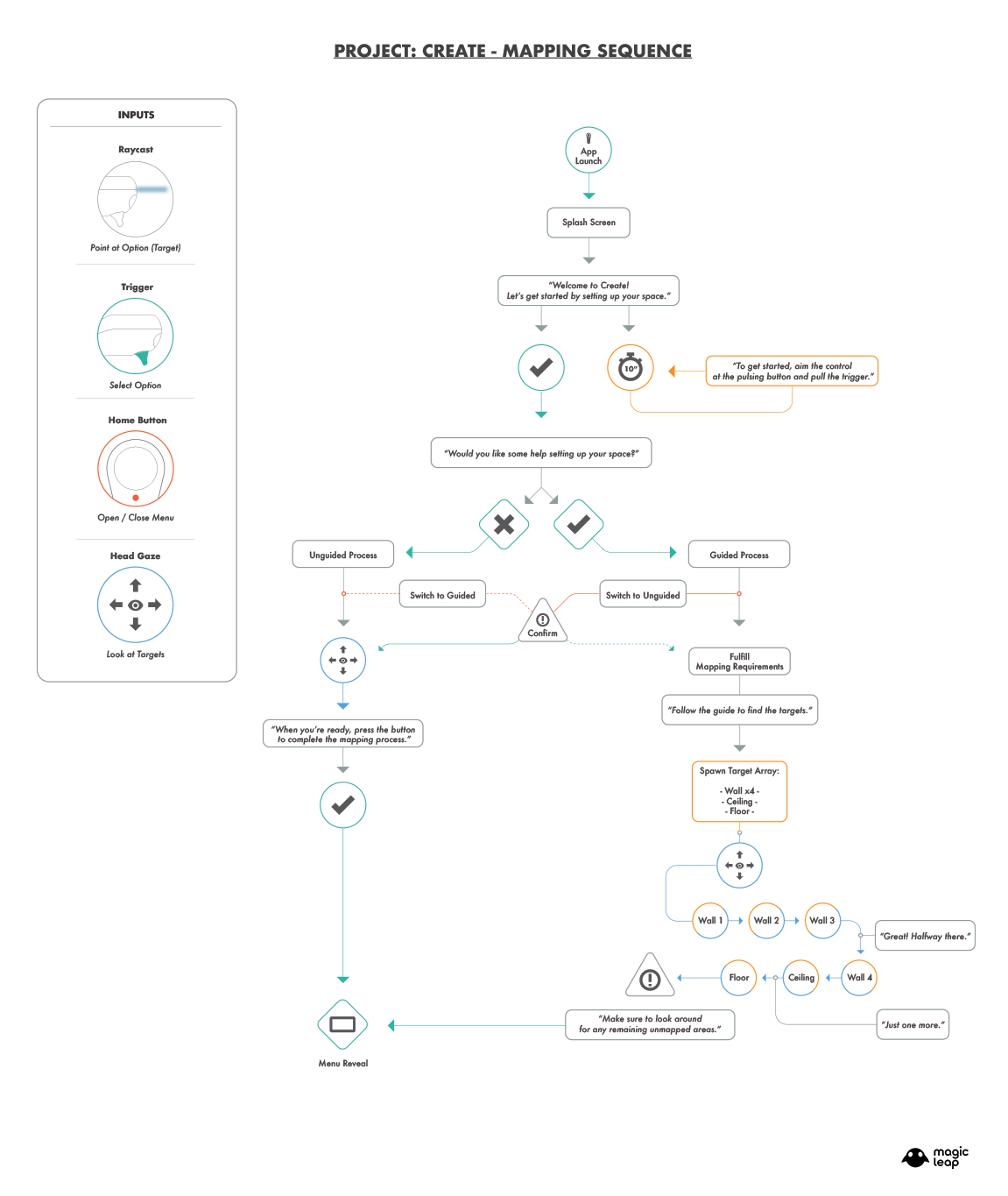 A unique challenge when designing for Spatial Computing is the fact that content is no longer bound to a screen or flat surface, it can exist anywhere in the real world, as such we had to define a set of constraints to present relevant information to users in the most coherent way possible. We defined two principal use-cases to define how prompts would be displayed throughout the experience.

Head Constrained Prompts – These remained constrained to the user’s FOV (Field of View) and had user-centric translation parameters to move along the X (horizontal) and Y (vertical) axis whenever the user looked on any direction. These also contained a distance awareness parameter, which controlled the Z (depth) axis relative to the user to prevent camera clipping or being able to stand on top of a prompt.

To prime users before they started the mapping process, we designed a series of illustrations featuring an avatar performing the steps required to properly map a room, these were then animated in Unity using the animation timeline. Supporting text instructions, and VO (voice over) were also used to account for people with visual disabilities.

Once users were ready to start the mapping process, they were instructed to use the control to point at an ‘accept’ button and then press the trigger to begin. 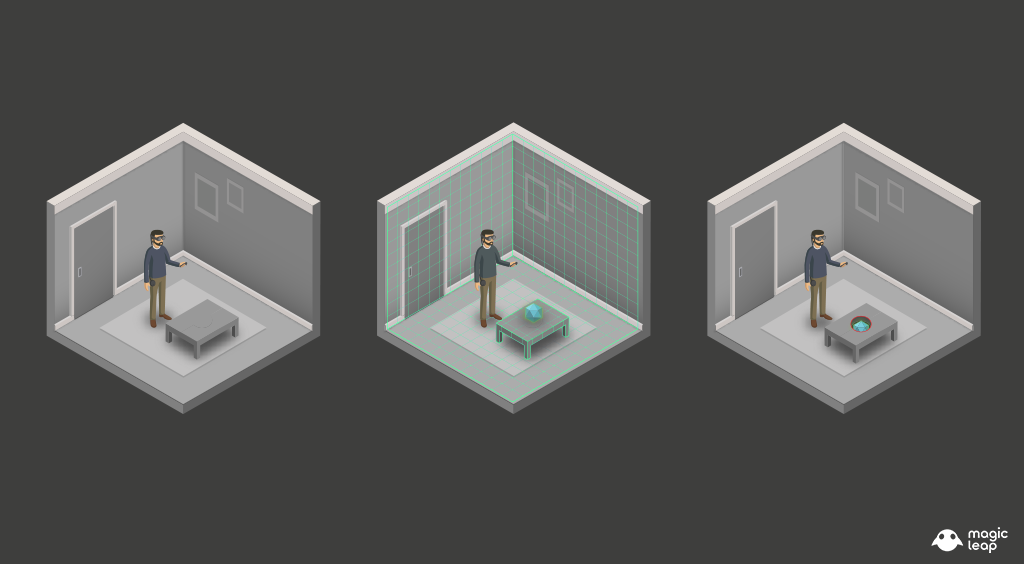 We evaluated several visual directions before we decided on the final version, we found out that simple and clear graphics that were easy to understand helped direct the users attention as they went through the mapping process.

We used metaphors like a floating compass arrow to guide users visually, we used concentric circles as targets they could focus on, and we made sure each waypoint resolved in a satisfying way in order to reward the user’s participation.

The image bellow illustrates a breakdown of the visual design elements we used for the Spatial Mapping process. 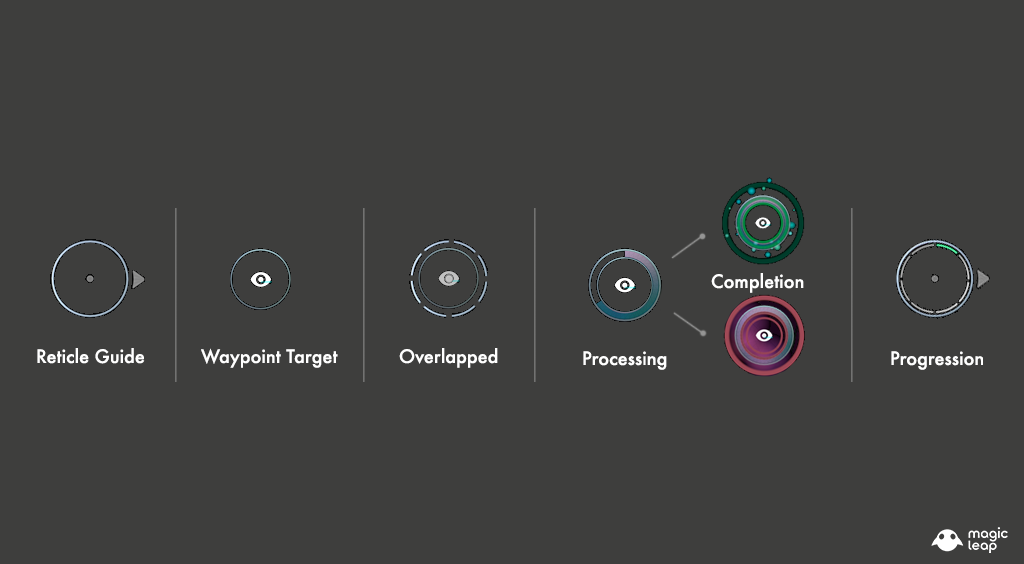 Reticle Guide – This is a head-locked reticle guide displayed at a fixed distance from the user’s head, the arrow displayed outside of the circular form pointed users towards the nearest waypoint target.

Waypoint Target – These were displayed on each of the invisible cube’s faces, and would only disappeared after users looked at them for a specific amount of time.

Overlapping State – This state was achieved whenever users interlocked their reticle guide with any available waypoint target.

Processing State – Having two concentric circles afforded us being able to utilize the negative space as a throbber fill progress bar that represented the remaining time that was necessary for the waypoint to be processed.

Completion State – Once the throbber filled the negative space between the reticle and the waypoint, a completion state was determined. If successful, a green burst and a checkmark icon would be displayed. If unsuccessful a red pulse and an ‘x’ would be displayed, followed by a message with suggestions for possible actions the user could take to resolve that specific area successfully (get closer, turn on lights, etc)

Progression – After the first successful completion of a waypoint was registered, the reticle would reveal a segmented bar to represent progress, once all segments were filled it meant mapping requirements had been fulfilled and the process had been completed.

The process described above was the result of dozens of rapid iterations, we had to learn what worked and what didn’t as we built the mapping system. Being able to observe a variety of people allowed us to identify opportunities for improvement, their feedback become an invaluable resource.

There were a lot of improvements which I’d love to talk about, but for brevity sake I will highlight two that are relevant to the mapping process:

1.- Guidance should be optional – More experienced users who were already familiar with the mapping process expressed their frustration when they had to be guided through the mapping process every time they launched the application or whenever they moved to a new space and needed to begin a new spatial map from within the app.

This user feedback encouraged us to revisit the user flow to accommodate for experienced users who wanted the ability to quickly map spaces.

The result was an optional path presented at the start of the mapping process, which prompted users to select from either a Guided or an Unguided mapping process while allowing them to alternate between either path at any point during the process.

2.- Design with accessibility in mind – While we tested for text legibility, some people with visual disabilities expressed that it would benefit them greatly if they had audio guidance during the mapping process as a reinforcement of what they were supposed to be doing and to provide a clear sense of progression.

We made the decision to add support for voice over instructions, which gave clear context to a larger amount of users. A big challenge when using voices before getting to the interactive portion of the experience is that they set a specific mood and tone to the experience, so we made sure the voice talent was directed appropriately to meet the creative direction of the experience.

In addition to audio, we leveraged the controller’s haptics to bring attention to the user when their input was required (E.g. – Press a button to continue/ start.)

One final consideration for accessibility was the use of the controller ray-cast (laser pointer) versus direct object manipulation, as this afforded interaction with lower exertion as well as being able to have a seated or standing experience.  This interaction model proved out to be so successful that it soon found its way into our system-level interfacing scheme. I will go into more detail about this later on this post. 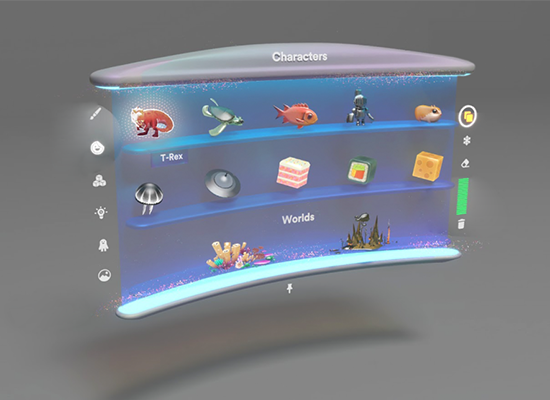 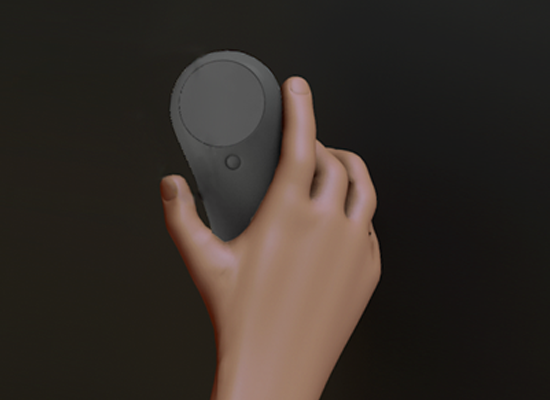